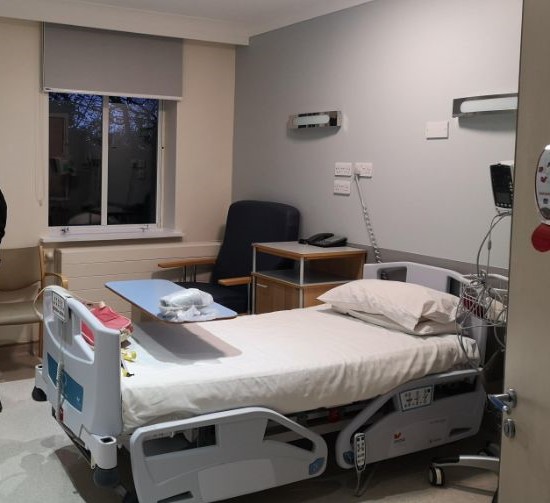 I have written before about my Hip Dysplasia, how it made me feel, and how gutted I was when my surgery was postponed.

This time last week, thanks to a last minute cancellation, that very same hip replacement happened!

I fully intended to milk the whole hospital experience. To be that blogger with lengthy Instagram stories and pictures of tubes, needles and all that sterile stuff. It didn’t happen, but I did do my first ever hospital check in on Facebook so everyone could ask if I was OK Hun.

What I did do was keep little notes through the days.

How my Hip Replacement Went

For clarity, although my hip replacement was done under the NHS (because the NHS is AMAZING) the procedure was done at a Spire Hospital.

We had to be at the hospital for 7am – I nearly went arse over tit in the ice rink of a car park, if I didn’t need a new hip before, I did by the time I get to the front door. Once inside I had to give my details then wait in a seating area until a concierge type lady called my name.

She calls and we are heading up to the ward:

Do you want to take the stairs or the lift?

Look at my notes, I’ve not done stairs by choice since 2016 – we took the lift. She showed me to my room.
It was huge! Like proper huge and just for me which is GREAT as I can’t abide poorly people.
She left us and we quickly checked the patient information file… FREE WIFI HUZZAH – it’s like being on holiday. 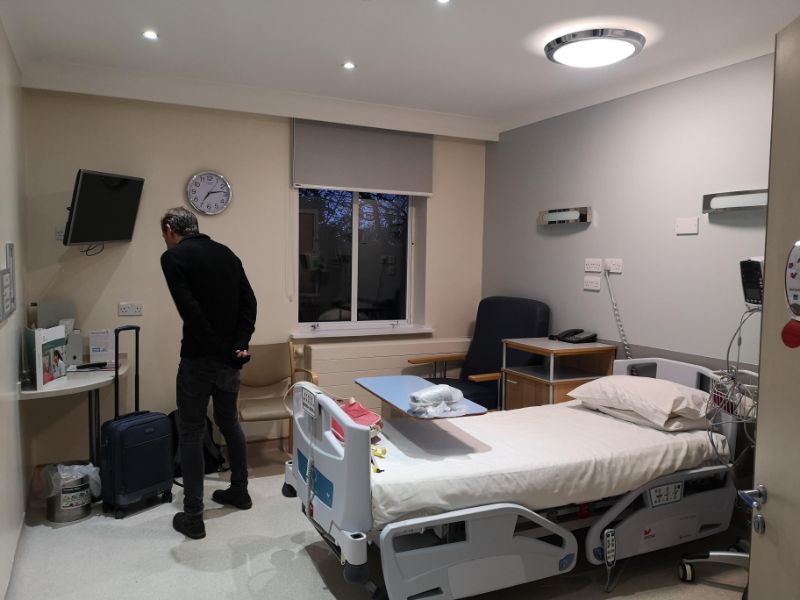 A variety of people kept coming in to ask me various questions – a health care assistant, a lady to take my food order for the next few meals (loving the optimism), the consultant, the anaesthetist and a very serious nurse.

What does a sedation ACTUALLY DO, will I be asleep?

He assured me that although it doesn’t put you to sleep many people use this opportunity for a nap. It will be like having a bottle of wine, I wasn’t sure whether to advise him that was standard for me so maybe they’d like to up the dose to two bottles of wine. I did take the opportunity to apologise for anything that I might say.

It then struck me that I was going to be laid on my side, pantless and braless. I’ve never viewed myself from this angle but I should imagine that this is really not my most flattering position.
I should probably send the surgeon apology flowers after – or therapy sessions.

The very serious nurse handed me my robe and paper pants and  I went to the bathroom to change. I instantly tore my paper pants trying to adjust them so my arse was hanging out the back of my robe, I now fully understand why they keep banging on about a dressing gown… My quite long cardigan would have to do.
Rory could barely contain himself when I emerged in my fancy attire. We sat there for another two hours, I was starving, thirsty and tired – it’s like being on a crap holiday.

Finally it was my turn. My old hip and I took one final walk together to the theatre. I had a little tear on the way there, I’ve never had any surgery before so I was nervous. And hungry.

The anaesthetist and ODP were brilliant, they put me right at ease – though that could have been the sedation they gave me to get the party started.  I’m pretty sure I was promised gin, maybe not.  I was wheeled in, said hello to everyone, turned on my side and was (I’m pretty sure) clamped in place. They popped a bit green curtain up, a heat pad thing across my shoulders and a mask on my face. My top end was basking in comfort while the bottom end was like a crime scene – so glad I did a final leg shave. The problem with being awake is that I was very aware at how little dignity I had at that moment, and I cringe.

Pain wise, I didn’t feel a thing but I was completely aware of being pulled about while stuff was taken out and put back in – at one point I’m sure I could feel my ribs rattling. I heard absolutely everything – cutting, hollowing, hammering.

Who knew that a hip replacement sounds like putting flat pack furniture together! Surprisingly, all these noises weren’t as disturbing as I thought they would be.

Once my new hip (Hyacinth) was in place I was taken to recovery – I felt sick, cold, itchy and was thoroughly entertained by the fact I couldn’t move my legs. At one point I put my arm under the cover and found this lovely, warm cushion. I thought it a little odd then realised it was actually my very own leg, fuzzy me tried to explain this hilarity to the nurse. She didn’t get it.

Once my blood pressure went back to an acceptable level I was returned to my room – I lay there hooked up to a leg compressor machine, itching, wearing half a pair of paper pants and entirely unsure as to whether I’d pissed myself or not. My crap holiday had turned into the aftermath of a dubious night out. 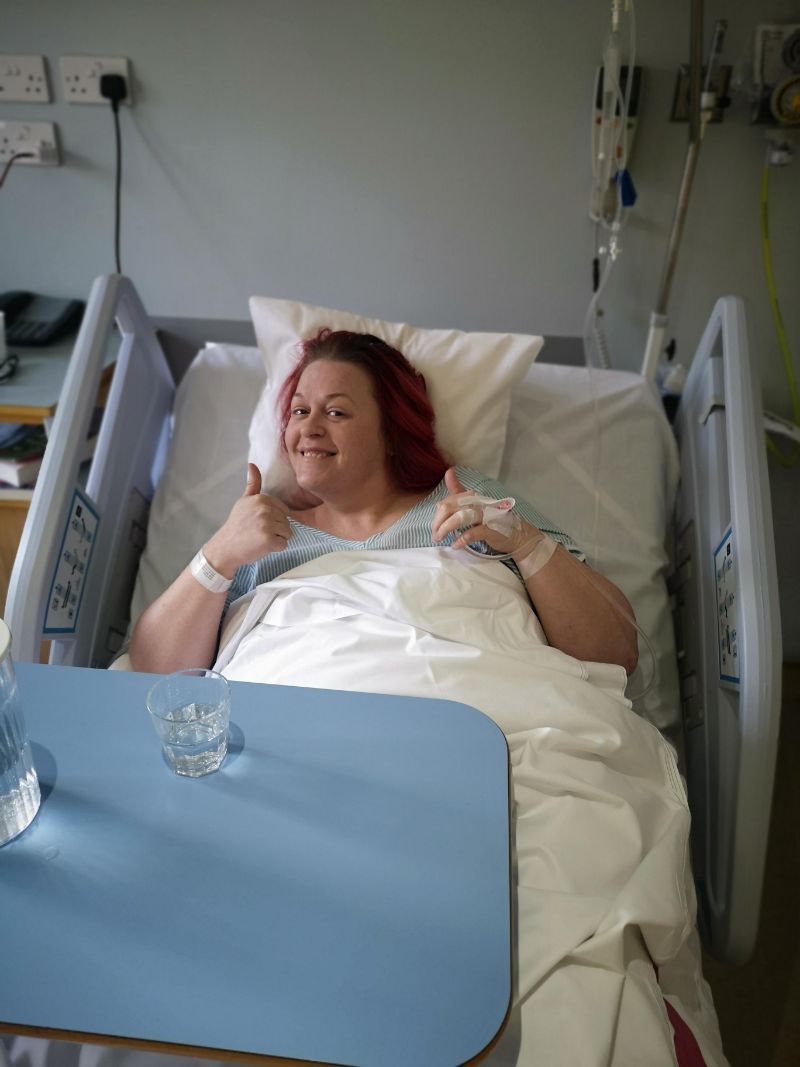 It was around this time I started to feel sorry for Rory – he must be questioning what he’d gotten himself into marrying me!

We decided that as I was so perky and clearly going to waltz through this recovery lark we would let the kids and my parents come and visit that evening.  Just before they arrived I started feeling wrong. I was boiling up and sweating and I couldn’t hear or see properly. I called the nurse as the kids arrived so Rory ushered them out while I threw up and inevitably pissed myself.

Good news is, that it counted as a post op wee – that’s a tick for me. The nurse and I laughed about my last shred of dignity having left, but I died a bit inside.

Overnight wasn’t amazing for me, at one point I fainted – luckily the nurse managed to catch me before I twisted or fell right over as that would have possibly done Hyacinth some proper damage. A little later I sparkled again which in turn made me pee the bed AGAIN so the nurses had to change me and my bed as I couldn’t walk.

We had transitioned from dubious night out to the night out of nightmares. 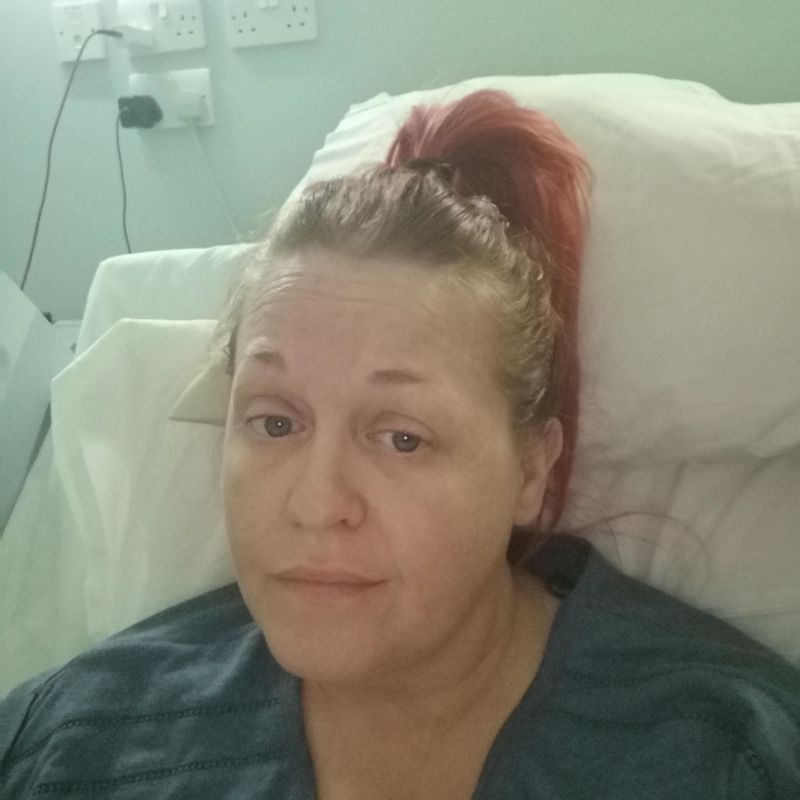 I was to summon a nurse every time I needed anything. ANYTHING. Whether I needed the loo or a window open or the lights turning off – anything. I hated it. Don’t get me wrong, the nurses were amazing. They were so kind and patient but by this point I felt so vulnerable and needy and I didn’t like it one bit.

The day after the op I was feeling pretty chipper. Obviously I felt like I’d been hit by a bus but I was confident in my recovery. I did a little walk to across the corridor and back, all was good, I was going to smash this hip replacement malarky. As the day went on, the epidural and sedation side effects wore off and the medication kicked in I was feeling rubbish and “You’re young for a hip replacement” stopped feeling like a compliment.

Gone was my cocky confidence and I felt lousy and grumpy. The raised toilet seat was too high, I dropped my grabber and had nothing to grab it with, I looked like shit and felt more ill than I have ever felt in my life and I’ve had some killer hangovers.

One thing I did realise though – my hip didn’t hurt any more. Hyacinth was in and seemed to be doing her job!

After a rejig of my medication, I began to feel a lot better and was ready to head home and smash this hip replacement recovery like a boss – You can see how my recovery is going here. 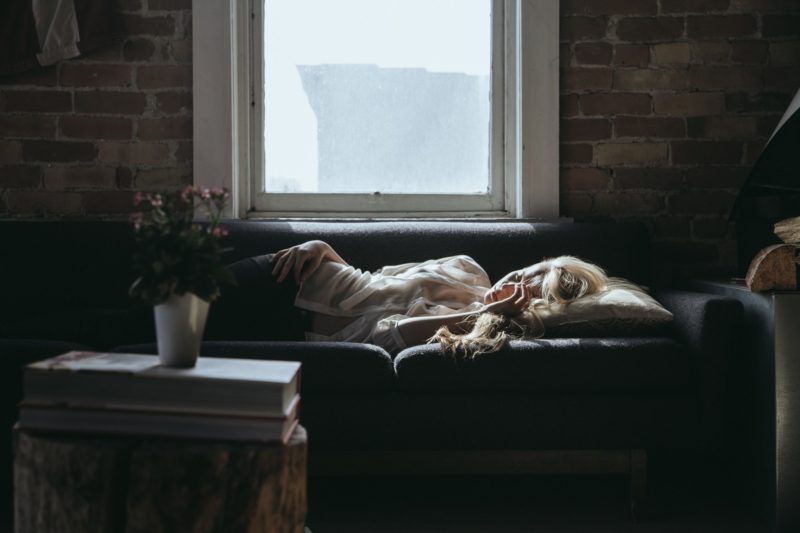 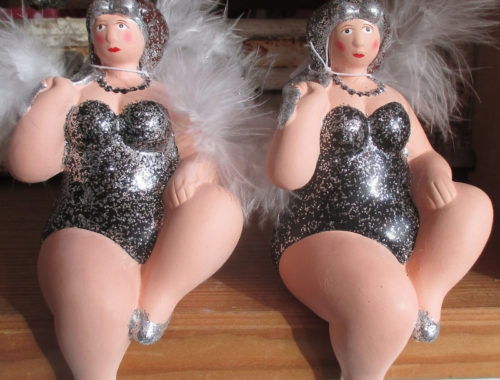 I’d rather be fat than a twat. 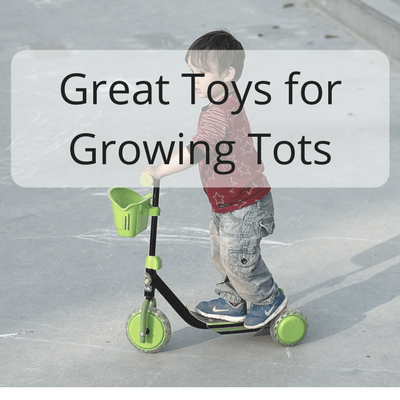